A good summary can be found at chapter 5 of the book "Jet engines: fundamentals of theory, design, and operation". We summarize it even more here. Three main designs exist: can combustors, can-annular combustor, and annular combustor. They were invented in that order, to solve some of the flaws of previous models.

A can combustor features all mechanisms required for a proper combustion: input air flow slow down, fuel injection nozzles, air dilution flows, and a hot gas discharge. Several cans are then placed circumferentially in the engine's core. The main drawback is the loss of useful volume in the combustor section, and the non-uniformity of the hot gas discharge.

The can-annular combustor has removed the external shell of cans, allowing a single air dilution diffuser to exist for all combustion cans, which is actually the core's shell itself. They make more efficient use of the volume and reducing the design complexity and weight.

Finally, annular combustors are designed as a single annular part taking all the available volume from the combustion section. All modern engines use this design, so do we.

Combustor, like other parts of the engine, operate with air flow. It thus affects its properties, like temperature, pressure and velocity. A combustor is said efficient when it minimizes the pressure drop. The air used for combustion must be slowed down, and this is generally done by both expanding the input flow and swirling a part of it. This swirl causes turbulences that imply pressure loss, and thus efficiency reduction of the combustor.

The following sketch represents the position and the shape of the combustor on the shaft (below in green) and the core's shell (above and in the front of the picture with transparency). All air will be forced into the combustor, mainly at the middle and the rear part of it to dilute the hot gas. Its section increases at front, to allow burning to happen, and decreases at rear, which will speed up and cool down exit gases too. 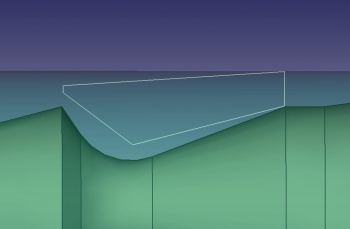 In a classical engine, the flame can be sustained not too hardly because there is always enough air to feed it. In a reduced size engine, the available air is obviously lower, so is the fuel mass flow rate. With lower amount of fuel or air flow disruptions, the mixture may become hardly flammable. Careful nozzle design and air flow paths will have to be studied.

Two approaches are common to flame keeping. In combustor first, the air is slowed down by expanding it and making it pass through a hole labyrinth and finally a swirler, the latter being also required for proper mixing of the fuel and air. Second, in an afterburner, where the flow velocity is much higher, a turbulence-making device is placed on the hot gas path and the fuel is injected and igniter in the turbulence. The turbulence device is often simply a pipe with a cross-section in form of a '<', the angle being pointed against the flow.

The nozzle will dictate the diffusion volume of the fuel in the combustor. Mixing efficiency with air depends on it, and temperature of combustor walls too. Indeed, if the volume, generally a cone, is too wide, the flame will touch the walls or prevent dilution air to enter as expected. If it's too narrow, the flame will be harder to sustain on flow disruptions.

Ignition will be provided by a RC model glow plug, if ignition tests succeed (unlikely). Otherwise, a spark igniter will be created and a single spark device will be placed in the combustor.

If we were confident about the engine, we could also ignite it when the plane is on the ground, with an external device like compressed air device for engine startup. But with first tests, flame-outs are likely to occur. It would be more safe to have the sparker on board. Besides, the usefulness of the on board igniter should be assessed when there's no startup device (compressed air, DC motor...) on board.