This page gathers general information on turbofans. Our proposed design is scattered in several pages, with an index at the bottom of this page.

Turbofans are the most efficient engine design for subsonic speeds cruising. They are more powerful and way lighter than reciprocating engines, fly at higher speeds than turbopropellers, and are less fuel-greedy than supersonic-enabled turbojets or other engines. They are however very difficult to design and manufacture and are thus very expensive. On this page, we will explore how costs can be reduced while still having adequate capabilities for high altitude flight.

A lot of information is available on Wikipedia's turbofan page. General principle is that there is a combustion that puts energy into a gas, this energy is extracted by a turbine, and the turbine drives both the fan that provides thrust and the compression stage that feeds the combustion with oxygen. As air is compressed from the intake, more air becomes available for combustion, and thus create more work on the turbine, and more intake, and so on. The fan provides thrust by creating a massive air flow, and the engine's core also creates thrust by evacuating the high-speed hot combustion gas. In commercial turbofan engines, the fan is generally responsible for 90% of the overall thrust. 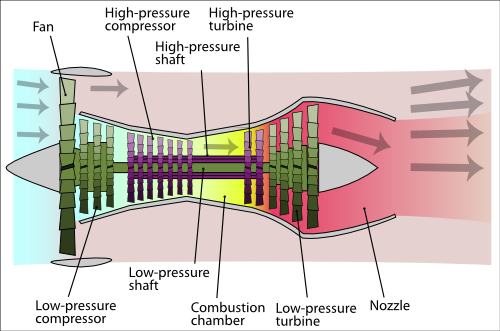 Some design properties and configurations have to be properly calculated depending on the use of the engine, mainly for the intended aircraft speed:

Video documentaries from a turbine renovator in Canada, probably the best resource on the Web for seeing what's inside real engines: AgentJayZ on youtube. Huge thanks to you!

Design configurations and properties taken into concern on real engines aim to increase efficiency, reduce noise, life time. Cost is of course a concern, and an efficiency by itself, but not the primary constraint as it is for us. Safety of operation is their primary concern, whereas cost and ease of maintenance are our primary concerns -- and maintenance will be an important part of the job if the quality goes down with the cost.

An obvious but important optimization to reduce cost and complexity of manufacturing is to have a simpler design of the parts creating the gas volume of the engine's core, i.e. the rotor(s) and the stator. In the above schema, we see that the shaft is straight and that the core envelope is curved suit required volume on each stage, although in real life, both are curved. If we take the required volumes on each stage and that we fix the core's envelope shape to a cylinder, the shaft will have a bumped profile (small-large-small diameter). This is much less expensive to design and produce, with a simple lathe (turning). Earlier engines, like the J79, have a cylindrical envelope. A curved envelope is complicated to build, requiring welding, pressing, stage bolting, the same techniques used in stator-construction in modern engines. These also do not scale down very well.

Real-world engines don't have a massive turned shaft because of the weight. They consist of plates, for each compressor and turbine stage, that are linked together to the next stage using a cylindrical bolted joint. So basically, the shaft has no core, it's hollow, except for the plates on each stage. Our small engine design allows us to have a more simple design, since having a shaft turned in raw metal won't change much on its final mass. Moreover, we may use a turbine-level mechanism embedded in the stator to try to cool it, which would make it hollow. The main mechanical issues are probably how to properly fix the blades on rotor and stator with such a small scale and how to fix the rotor on the stator with little gap? 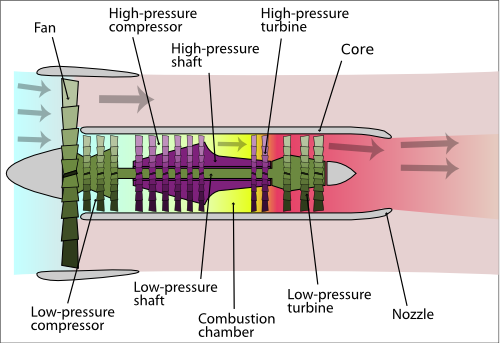 The most complicated parts to build in a turbofan or turbojet engine are the turbine and compressor blades. The high-pressure turbine specifically have to face very high temperature and pressure. On real engines, they are made of ceramic-coated nickel-based superalloys. It's the inability of blades to withstand heat and work that limit the power of the engine. Indeed, around 70% of the gas provided by the compressor is used only for chamber and turbine cooling, instead of using it to burn more fuel and creating more thrust.

The compressor and the turbine are not only made of blades on the rotor, but also blades on the stator, also called vanes. They prevent a rotating air flow driven by the action of rotor blades to form inside the engine, which would not allow pressure to be built on the gas at each stage. Stator blades or vanes redirect the airflow on the next stage in the more efficient direction (see velocity triangle).

Highest efficiencies are reached in turbofans when gaps are reduced between rotor blades' tip and the stator, as well as between the stator blades' tip and the rotor. As always, good efficiency means high precision and higher cost. Anyway, the precision of blades will have to be very good if we don't want it to dislocate when it reaches the high rotations-per-minute achieved by such engines. The shape of the blades and the parameters of their cascade also affects the efficiency, and in particular the pressure ratios. A small 5 stage supersonic compressor providing the same pressure rise than a 15 stage subsonic compressor is less efficient, but it may be compensated by the higher thrust-to-weight ratio.

Blade geometric design is also very complicated. First turbine engines had flat blades. At the time, the efficiency of the engine was so terrible that it was believed that turbojets would never beat reciprocating engines. Then, in 1926, Alan A. Griffith proved that if blades were designed as aerofoils (airfoils in US English), the engine would behave way better, and would even be efficient enough to deserve being built. Airfoils for blade designs allow compressor stages to better increase the static pressure since they create an expander, an increasing area for the air flow to pass through.

Cooling is always needed in turbines, even if recent advances in materials and coatings increased the ability of blades to withstand heat. Since we will use low cost metals, cooling will be the main issue once we figured out how to build the engine. Expected combustion chamber temperature is around 2000°C for hydrocarbon or alcohol fuels. Iron melting point is around 1500°C so it will be way off-limits, and even below that, it will deform before melting. And should we mention that blade deformation at high-centrifugal loads, caused by the high rpm, is a very good way to blow the engine off?

Several cooling ways are used in a turbofan/turbojet engine: in the combustion chambers, only a small amount of the actual air flow is used for the combustion, around 20%. The rest is injected on the walls of the chamber and in the end of the combustion to dilute the hot gas, and to prevent the walls from melting (film cooling). Then, the first object struck by this hot gas is the vanes the turbine, which are, on actual engines, made of a ceramic-coated high-temperature alloy, but more importantly, hollow. Blades are welded on the stator ring, around which air from the compressor discharge or bleed circulates, enters the blades, and evacuates through small holes in the blades (convective cooling and film cooling). For the rotor blades, the same principle is used, but with compressor air passing inside the rotor.

Startup can be done at ground manually, with compressed air or a high speed electric engine for example, which will allow to reduce the weight and complexity of the engine. On the other side, a turbine engine is a nice way of having power on-board, using reducing gears and an alternator. That would also reduce the weight required for batteries, and the alternator would be used reversely as a startup DC motor. Also, the accessories attached to the reduced shaft would allow hydraulic or pneumatic power to be considered.

Igniter mechanisms must be integrated to the engine, possibly a self-maintaining igniter like a thread of tungsten, as used in miniature R/C engines. The combustion should be self-maintaining, but if pump or throttling malfunction, or more generally if a turbulence in the intake happen, leading to a discontinuous flow of fuel or air and compressor stall, re-ignition would have to be made during the flight.

Engine must be designed with sensors, at least to determine if the engine is running properly or if it's under failure, and to control its rotation speed to ensure it's running at an efficient enough value, with regard to altitude (pressure and temperature). That can be done with a rotation sensor, measuring the magnetic field disturbances created by the blades or the rotor. Engine temperature should be controlled and recorded too. Pressure at different stages would be very useful for engine development, then for behavior indications when running at high altitude. The rotor speed information and altimeter may be redundant with some of the pressure information.

In real engines, blades are fixed like this, with a dovetail or fir-tree shape that allow them to be mounted and removed axially but not orthogonally. The main problem appearing with this kind of mount is related to the size of the engines we aim. As the diameter of the fan shaft gets smaller, the available space for the blade roots gets smaller, and require a higher precision for their manufacturing. See this example of small fan, from Price Induction. The strength applying to the fixation is luckily reduced due to the small weight of the blades. A simpler design in blade root would be nice for manufacturing ease, a simple square-section root is probably enough.

Another lead is to create the blade disk and the blades in a single piece. This can be done with modern manufacturing process like electric discharge machining, 5-dof machining or even laser-based 3D printing. Here is an example from Bladon Jets, the BLISK.

This is a major issue. On real-size engines, the stator is thick enough to have a rail into which the perpendicular-to-the-blade-roots are inserted and fixed. Creating a perpendicular blade root is already a challenge. Rotor blades would be able to compensate this problem by having longer roots with a locking mechanism on their side, but for the stator, the limited thickness of the stator's wall forbids it. Maybe bolting should be considered. In that case, the screw heads would likely surpass the core's envelope and lightly disturb the fan flow.

Fuel tanks in the wings, fuel pumps, fuel lines, and engine mounting will have to be designed too. Electrical wires for pumps, sensors, ignition and possibly the startup motor/alternator will also be required. Sensors will require input ports on the computer, and pump driving (= engine control loop) will require at least one output port for each engine on the computer.

Two kinds of bearings are used in turbines.

Carbon or composite lip or blade seals prevent the oil from escaping to other parts of the engine. They may be arranged as labyrinth seals to increase their effect. Air bled from the compressor discharge is often used to counteract the oil pressure on the seals.

From the different concerns expressed above, we propose a design for a low-cost turbofan. We also consider and propose alternative turbofan designs based on a mixed-flow turbine. Several pages have been created in the Turbofan category to explain each subsystem and parts manufacturability: